Wednesday, November 20, 2013 10:46 AM
Christian Curts got into business, like the placement of the products he sells, at the ground level.

The CEO of Christian Flooring didn't go to college and didn't finish high school. He went to work early, got his GED and bought his first company at age 26.

Now he owns not only Christian Flooring — which sells all kinds of flooring products from its stores in Henrietta and Webster — but also a company called AutoCrafting Solutions, as well as a construction company and real estate company.

"I had no equity partners," said Curts, 34. "These were all boot-strappers. "If you're going to be a businessman, you have to go into business. I've learned things the old-fashioned way, the hard way. There's way too much emphasis on academia today. Go spend five years working somewhere, put it on your résumé and I'll hire you."

AutoCrafting was the first business Curts bought. The Beahan Road-based company, which is moving soon to Hinchey Road, has divisions for fleet solutions and mobility solutions. The former does outfitting for company trucks and vans; the latter involves converting vehicles with, for instance, wheelchair lifts.

— Christian Curts, CEO
Christian Flooring was founded in 2008, although the first store, on West Henrietta Road, didn't open until 2010. The Webster store followed in 2012.

Curts' business partner, Jason Calder, founded Christian Flooring and Curts bought him out this year. The company moniker not only plays off Curts' first name, but also pays homage to his faith.

Another end of the business, Resolute Construction Services, does commercial flooring for places like shopping malls. Resolute built the ballroom addition at the Strathallan Hotel on East Avenue, Curts said, as well as renovations at East Avenue Commons.

Overall business has grown 700 percent in three years, Curts said. He plans to add a couple more Christian Flooring showrooms in the Rochester area within four years. As for the bigger picture, Curts talked about mergers and acquisitions, saying it's likely that his company will "align with other companies that do what we do." Landscaping and pest-control companies come to mind, he said.

Curts was diagnosed with testicular cancer in June. He underwent surgery in July, learned in August that the cancer spread and just completed nine weeks of chemotherapy. Going through that has reinforced what's important to him, in business and in life.

"We do business in an old-school way with a new-school approach," he said. "I try to keep it interpersonal with my staff. We involve ourselves with the community. My word is everything. It's the right way to do business."

Alan Morrell is a freelance writer based in Rochester. 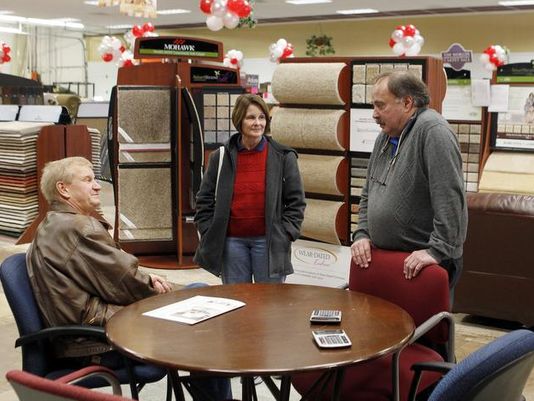